Over the last couple of weeks I have been blessed with the luxury of free time!  Wow!  Part of this involved a long weekend in Edinburgh, and part of this involved getting things done for myself, and no-one else.  It’s a bit like the shoemaker’s son going barefoot, or the builder’s house falling down: I’ve been designing knitwear for others to wear (one hopes!), but with no recourse to my own personal projects.  Where is the time?!

Luckily, time can be found in a number of places, especially long train journeys.  For many reasons, I LOVE trains (so tempted to write “choo-choos”, but I resisted…sort of 😉 ) and when you’re sitting on one for 4.5 hours it’s impossible not to knit.  So I packed my Pisces pullover, which has been waiting patiently for a neckband, and the Bleak cardigan from Kim Hargreaves’ North.  Here’s how they look now, beginning with Pisces:

As ever, I adore it.  When I put this jumper on for the first time, I truly regretted not making it a lot sooner than I did.  My other Lima garment is a knee-length version of the Able skirt, but the sensation of wearing that is nothing compared to a sweater.  I could go to sleep in it.  A cat would be all over it, kneading its claws into every stitch.  I can’t quite believe I’m saying this, but I want it to be cold! 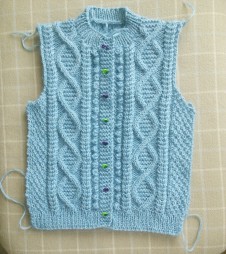 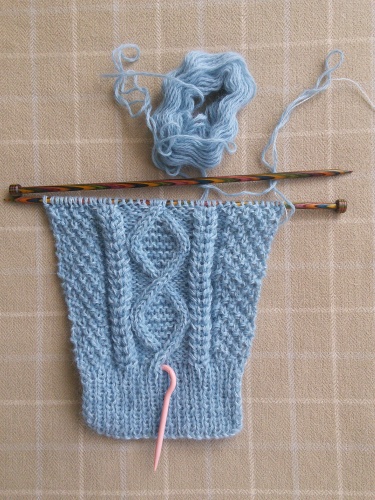 Here we have my not-so-Bleak cardigan.  Regular readers will see immediately that this has progressed far more quickly than the former project!

Progress has been good enough for me to envisage my wearing this in October.  The greedy voice in my head wants to run away with me and say later this September, but the sensible voice, so often drowned in a wave of enthusiasm, says, “Play safe.  Then, if you’re early, so much the better.”  So I might listen to it for a change and see what happens.  At last count, I had two grey hairs.  We’ll see how many more I have before Sensible Voice becomes the default.

This cardigan is just right paired with full skirts and other high-waisted styles, but I’ve made one modification detailed here on Ravelry, which knitters of certain figure types might find useful.

I do love a cardigan.  It looks as though my next few projects will be cardigans too.  Is it me, or are cardigans the most grossly underrated and underestimated of all garments?  They are so cosy, comfy – and PRACTICAL.  The back of my mind has been tickled by a military/aristocratic reference to the Earl of Cardigan, and for good reason – here’s a brief reference to the story.  It’s impossible to escape the practical, utility-driven motivation behind knitwear and its development throughout history.  I’ll wind up the digression here, but not before pointing out that the invention, or widespread use, of the balaclava in the UK was another consequence of the Crimean War, and that the raglan sleeve – although a style not restricted to knitwear design – has similar associations.  Some folk balk at the idea of politicised knitting, but the truth is that knitwear has never been far away from the front line (pun intended).  Even the most cursory skim-reading of the history of knitting will prove otherwise.

And another thing: whilst in Edinburgh I was fortunate to be staying with a friend with one of *the* most amazing collection of handcrafted items I have ever seen.  Writing about knitwear, practicality and utility has reminded me to set down some thoughts I had about a particular part of her lovingly kept collection, and I’ll share these in a future post.

But back to reality, and practicality (ha! – that word again), and this week I’m in the middle of knitting samples for an accessories collection I’ve designed for post-beginner knitters.  As far as I know, that phrase is mine! 🙂 More importantly, I hope it’s understood by everyone else, especially those I have in mind for these projects.  They are aimed at knitters who’ve mastered the basics and want to dip a toe or two into the pool of texture: lace, cables and fairisle in the round.  And no, I haven’t forgotten post-beginner crocheters!  There’s something for them too.  In fact, post-beginners are in for a treat very soon: I’m running workshops at Fringe to support the premise of the collection (see my classes page if you’re interested), and coming up is a post especially for them.  If you’re a post-beginner, watch this space, especially if you need a bit of encouragement and would appreciate some insight into becoming an even better knitter – and I say that humbly!

This site uses Akismet to reduce spam. Learn how your comment data is processed.